Yeah! I finished the first draft of The Toltec Conspiracy — first novel in the Clark Ransom Thriller Series. I edit that novel in the afternoons and write the second novel, The Tula Plot, in the mornings

I will talk about where I set these novels since these settings are as important as the characters.

The plot of the first three novels — The Toltec Conspiracy, The Toltec Plot, and The Massacre at Cholula — mirror the mythic/historic movement of the Toltecs. In these novels, the Toltecs — a pre-Aztec indigenous empire — built the pyramid Cañada de la Virgen near San Miguel de Allende, then established their capital and another pyramid in Tula, and then went to Cholula where the Aztecs slaughtered them at the site of the Toltec’s greatest pyramid. See the following map:

What follows is a little more about the first novel’s setting, whose cover is here if you haven’t seen it: 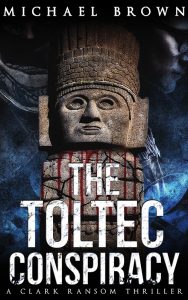 Here is Clark Ransom, our hero, first viewing the Cañada de la Virgen pyramid from the highway below:

With nothing but hills stretching to the horizon, at the center of Clark’s view was a hill atop which sat the stepped pyramid as it had for a 1000 years… The view was pristine, the same as it must have looked to pilgrims, carrying their baskets of tribute up the switchback path carved into the face of the cliffs.

In several visits to Cañada de la Virgen, I sensed an aura that seemed a perfect fit for a thriller.

Here are facts gathered from Wikipedia about the site:

The Toltec-Chichimec founded villages, built pyramids and other architectural structures throughout the central basin of the river now called Laja, known as San Miguel in the 16th century, and apparently, a little less than thousand years ago was called Pánuco.

According to the list of names appearing in the Toltec – Chichimec Codex, which refers to the various provinces that formed the Toltec Empire, Cañada de la Virgen would be located northwest of the Toltec territory. The name of its capital is unknown, because the name is unreadable in the above mentioned list, everything shows it is located a few kilometers south of the site in question. It is a city made up of various architectural, elements including a ballgame court and a huge plaza with three pyramid foundations.

I love the following photo and associate a lot of the wonder of Cañada de la Virgen with its astronomical orientation.

And again from Wikipedia:

The site faces the celestial north, where the stars spin around in a circle throughout the year. The moon moves up the stairs of the pyramid as its cycle advances. It rises and falls perfectly in pyramid notches at key times in the lunar calendar and during solstice periods.

I hope you enjoy your spring or begin to. For some, winter has lasted too long.

3 thoughts on “Pyramids in Mexico”

Get a selection of short stories. Experience the varied ways suspense can grab you.